Peacocks put themselves out there 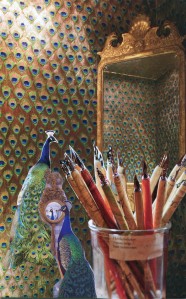 I had no idea why I’d started saving images of peacocks and peacock feathers, but I was sure it meant I’d be making a SoulCollage card that featured them. Today’s writing prompt on a blog I follow was illustrated with a peacock, which prompted me to pull out my peacock images and figure out what to do with them.

I did so with some apprehension, as peacocks have gotten a bit of a bad rep. I noticed that not only were my images of peacocks, but some also featured mirrors. I am not Dutch, but I grew up in a Dutch-American community with a strong Calvinist bent. Clearly some of the culture has stayed with me, because as I looked at these images, I noted that peacocks (never mind peacocks gazing into mirrors) certainly weren’t very Dutch. What in the world was this card going to be about? Vanity? Pride? Yikes!

To my surprise, my collage turned out to be about the self-revelatory nature of being a writer–or at least a writer of personal essays. I’ve been somewhat introspective all my life, but I haven’t exactly put the results on display. Until now.

I think the message of this card is that when you reveal yourself with the intention of benefiting others, it’s a beautiful thing. Even if it’s not very Dutch.

Note: If you’re unfamiliar with Dutch-American culture, a couple of stories to illustrate. Growing up, I had a Dutch friend who made her own clothes. Although they were invariably plain, she seemed to worry about their being too fancy, and would often subtract details in order to get them just right. (Only the Amish would have been able to find anything fancy about them.)

A Dutch couple we knew had dinner with their best friends one night. The next day, the wife went to the hospital and delivered twins (who were adults when I was a child). This came as a surprise to their friends, who hadn’t realized she was pregnant. The couple themselves hadn’t  expected twins, and had only a single girl’s name prepared, Mary Frances. This wasn’t a problem. The twins became Mary Frances, and Frances Mary.

Discretion, economy, and nothing too fancy. What you might call the opposite of peacocks.

2 Comments to “Peacocks put themselves out there”