Kissed by the Universe 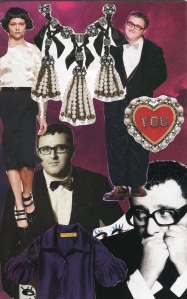 I suspect the Universe is always smiling on us, and pulling for us–but I’d be the first to admit, it doesn’t always feel that way. This past week, though, I felt like the Universe was not only smiling, but blew me a kiss.

A little over a week ago, I was experiencing a delay, and cast about in my mind for tasks I’d been putting off to a more convenient moment. I remembered that I hadn’t bought any clothes in more than 6 months, not even a pair of socks, and that I’d been noticing I needed some tops.

I surfed over to a discount site, and checked out the work of my favorite designer, Alber Elbaz of Lanvin, the oldest fashion house still operating today–founded by a woman, Jeanne Lanvin, and owned by a woman today, Shaw-Lan Wang. I could hardly believe my eyes when I saw a beautiful teal silk dress I’d pinned on Pinterest last summer, just one left, in my size, at a very deep discount! 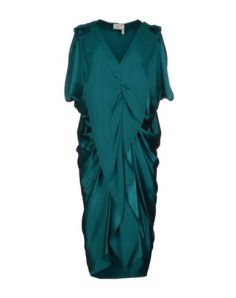 Reader, I ordered it. It arrived last night, and it fits beautifully. Alber Elbaz has said he thinks about what a woman wants to hide, and what it is she loves about herself–and may I say very few people involved with the clothes I try on seem to do that!–and that thought process shows when I put on this dress. Take just one feature, the sleeves, for example … the bottom of the sleeve is like a bell sleeve, but at the top, the fabric is origami-folded and stitched down to show the shoulders, but still feels like a sleeve, so comfortable. It reveals without feeling revealing. It’s unlike anything I’ve worn or seen, and I think it’s pure genius.

And that is why I feel kissed by the Universe.

The practical among you may be noting that a dress is not a top, and of course, you’re quite right. I was looking for a dressy one as well as a casual one, and this dress will serve some of the same purposes as the dressy top I had in mind. (This dress was also made as a blouse, but one has to be open to receiving a kiss from the Universe in the form of a blouse with a skirt attached!) I’ve also ordered a sweater that I haven’t received yet.

Illustrating this post is the SoulCollage card I made this past weekend at an Open Studio I attended (which is just getting together with others to make SoulCollage cards), in honor of my new dress. This card has several images of Alber at various ages, and the rest is his work at Lanvin–clothes, sketches, costume jewelry.

Alber Elbaz is a man who I believe loves and respects women–something I feel we could use a lot more of in the people who make the clothes that announce who we are to the world.

May the Universe blow you a kiss of your very own this week!