How to be serene in the face of great provocation 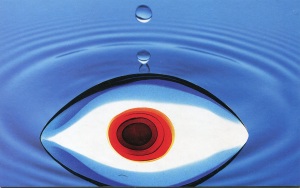 Do you have someone in your life who irritates the living hell out of you? Someone who totally knows how to push your buttons? Someone you can’t ban from your life, or get away from, like a coworker? Or a relative who’s going through an awkward stage? Someone whose whole life, perhaps, is an awkward stage?

Your secret is safe with me.

I devised this little exercise, based on the work of Eckhart Tolle, a few years ago when I was in desperate need of it myself. It really made a difference for me, and I hope it will for you too.

This post is illustrated with the SoulCollage card I made tonight, Witness (one of the Transpersonal cards).

Self-realization means that we have been consciously connected with our source of being. Once we have made this connection, then nothing can go wrong. –Swami Paramananda

These are the first words I hear in my mind’s ear when I settle into meditation, or check in with my inner guidance as I go about my day.

“Thank you,” I often respond. It’s good to be reminded, to remember, to know for sure, that indeed and no matter what, all is well.

Too often I spend time worrying, if only at the edge of my consciousness, about things that will never happen–or that already have. The fact remains: All is well.

I’m reminded of Eckhart Tolle’s question–In this moment, do you have a problem? As many times as I’ve asked the question, I never have. The answer is always no. Right now, nothing is really wrong.

The same thing is true if I’m physically in pain. If I allow myself to enter into the pain, to become fully aware of it, my experience is that immediately the pain alters for the better. Awareness, all by itself, is healing.

Here at the center of my existence, all is well. It truly is.

The collective disease of humanity is that people are so engrossed in what happens, so hypnotized by the world of fluctuating forms, so absorbed in the content of their lives, they have forgotten the essence, that which is beyond content, beyond form, beyond thought. –Eckhart Tolle, in Oneness with all Life

I haven’t watched TV at home since the Clinton administration. And really, I have Bill to thank for the whole thing.

I remember well what was being featured on the news when I last watched it. The existence of Monica’s blue dress, purportedly complete with DNA, was making headlines and being discussed at the top of the hour, every hour.

A news junkie at the time, I was thoroughly disgusted with just about everything I was hearing, so when my cable went out (I needed it to get decent reception of even basic channels), I took it as a sign. I decided to cancel my cable service and swear off TV till the next inauguration. And by the time the next President was sworn in, I felt no need to watch news of his administration either.

It’s not just television news I don’t watch … at this point, I have a news blackout. I don’t read the newspaper, listen to news on the radio, or read news online (except during major election cycles). I’ve learned that when something important happens, people will tell you. One of my former coworkers actually delighted in telling me what everyone else already knew.

But even with my all-but-permanent news fast, I still manage to score quite well on current events quizzes–far better than most people who are actually keeping up with the news. The people who e-mail me the quizzes seem quite disgusted to hear my scores.

I don’t know how to explain this. The only thing I can think of is that perhaps our national politics are like a soap opera–even if you watch only every four years, you can still keep up with the plot.

I find that it’s nice to take a step back from the world, and it’s really nice to have a peaceful, quiet home that’s a true haven.

On 9/11, I heard the shocking news on NPR after the second plane hit. I watched TV pretty much all day at work that day, but afterwards I saw no more coverage of the attack. It’s been documented that how traumatized we were was directly proportional to the number of replays we watched. I found myself far less affected than most other Americans. Maybe it’s because I’d had a wake-up call in my life less than a year prior that caused me to re-evaluate my priorities and choices, and make time and resources available for what was truly important to me. Or maybe it’s that I wasn’t watching TV at the time.

When I tell people I don’t watch TV, they often ask what I do with myself instead–and isn’t that revealing? When I watched TV, I planned my life around it (think back to when you had to program a VCR if you couldn’t be there to watch a show), like it was a living being I needed to consider. I got home, turned it on, and watched unpleasant news up until the moment I turned everything off to (try to) go to sleep.

Now I have time to read, meditate, do needlework if I’m in the mood, cook for both people and dogs, write, spend time with friends, garden, shop, try new restaurants, sleep well … many of which lots of people say they don’t have time to do. Yet virtually everyone has time for TV.

Now I find that I have fewer thoughts and worries running through my mind. It’s not that I don’t have them, but the ones I do have are actually mine, not the whole world’s. I also have far less to feel angry about. This extra mind space allows me the inner quiet to hear my own guidance and higher wisdom, which I need to hear on a daily (hourly) basis.

Back in my storage room, I still have the first, and only, TV I ever bought. I remember what a necessity it seemed like at the time. I suppose it’s clutter, but when people say, “Heather doesn’t have a TV,” it amuses me to say that in fact I do have one–but it’s unplugged.

I gather analog TVs no longer work without an adapter. I’m cool with that. Unplugged is exactly how I like my TV–and my life.